< True, some games are less of a struggle than some; the first [[http://dragonage.bioware.com/|Dragon’s Age]], for instance, was a delight for me. In fact, I find most of Bioware’s titles to be well balanced and playable. A game that comes to mind that is a big struggle, however, is the [[http://basiliskgames.com/|Eschalon]] series.

> True, some games are less of a struggle than some; the first [[https://www.ea.com/games/dragon-age|Dragon’s Age]], for instance, was a delight for me. In fact, I find most of Bioware’s titles to be well balanced and playable. A game that comes to mind that is a big struggle, however, is the [[https://basiliskgames.com/|Eschalon]] series.

> Images were all found on [[https://basiliskgames.com/|Basilisk Games’ Website]], makes of Eschalon — and seriously, I hope they keep making more games.

Felix has been kind enough to give me permission to post on this site, so in the proud tradition of programmers everywhere: Hello, world!

Let me warn you; the first part of this is going to read a little bit like a rant, but I promise it gets constructive. And I’m not ranting against things I hate, I’m ranting about things I wish could be better. Things, in fact, that I love. To my mind, this is vital for game developers to see; we, as a collective, need to always learn and strive to make better products. We need to learn from the good and from the bad, and always play with an open mind.

So, I’ve been playing games for most of my near-30 years of existence, starting with the Commodore 64 and Intelevision, and going through the usual progression of Nintendos and PCs up to the modern day. I still play games, especially RPGs, and I enjoy writing games as well.

And let me just say this; I’m tired of being challenged by the random number generator. Seriously, life throws enough dice at me; does my entertainment have to be filled with monsters gleefully critical-hitting me, dropping insufficient loot, making me have to struggle for existence? Is re-loading a game to retry combat or to get better loot really necessary?

True, some games are less of a struggle than some; the first Dragon’s Age, for instance, was a delight for me. In fact, I find most of Bioware’s titles to be well balanced and playable. A game that comes to mind that is a big struggle, however, is the Eschalon series.

I actually really like Eschalon; at the time of this writing, there are two of them, made by a small independent developer. To be frank, I would buy his game just to support him (in fact, that’s why I bought the second one as I found the first one to be rather unplayable — fortunately, the second game was much more playable, but I still could not complete it). But his games are out and out brutal.

Combat is something to be dreaded, usually followed by sometimes minutes of real-life time resting (and, by the way, hoping you don’t get ambushed by random monsters while resting. An ambush resulted in an immediate reload from saved game, as I could never survive one). He markets his games as for the “hard core” RPG-ers, but to me, there’s something distinctly unsatisfying about having an uphill battle up a mountain that seems to have no peak.

Don’t get me wrong; I like a challenge. I like, for instance, having to progress my character in one area in order to be able to move on to the next. However, when I am literally re-loading my game not because I failed but because the monster got too many crits in and I would rather re-play combat than wait for my guy to heal, the “challenge” has gotten into the realm of stupid. I like a challenge at first, but I like it to eventually get to the point where the journey is easy and it becomes the end game itself that is hard. 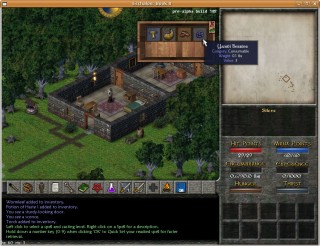 Eschalon just keeps throwing harder and harder things at you, and at the same time, it pinches your resources; fewer and fewer drops from monsters. You start out the game broke and getting your butt kicked by everything in the world, and towards the end of the game I found I was even more broke and still getting my butt kicked. It got to the point where I simply could not finish the game.

And it’s a shame, too. Eschalon is well-written and interesting. I like the story, I find the world really beautiful. I really, really want to enjoy those games. But the combat is just beyond terrible — and this is in “Easy” mode, too!

I’m sure I’m not the only person who thinks this. It got me thinking; what would make Eschalon more playable? Two things, together, would make the game fun; removing critical hits and giving me more gold per combat encounter. See, in Eschalon, critical hits are something the computer gets to use against you but don’t benefit you nearly as much. Statistically speaking, you will get very few criticals compared to the computer player who has many more creatures and many more chances to “crit” you, especially if you are surrounded. Lots of games do this, actually; they have a concept that benefits the NPCs but does not benefit the player. (shotguns in some FPS games come to mind…)

Additionally, Eschalon had a very distinct “monetary cost” per encounter. Resting would cost you food or health potions; either was pretty expensive, especially late in the game. When a monster didn’t drop ANYTHING, it almost brought me to tears; and too often, monsters dropped nothing.

If these two things were “fixed”, Eschalon would be a playable title. If you combine that with health regenerating over time without resting, or with resting being “faster”, you would have a remarkably good game.

So … rather than just complain, I look at this as an opportunity to make future games better. And this is the idea that I want to throw out at you; configurable game mechanics.

What if, instead of giving me the “Easy”/”Medium”/”Hard” selection (which is kind of silly anyway — my idea of easy may be someone else’s idea of hard), let’s give the player a menu of options. For Eschalon, I would present options something like this:

And so on and so forth. I’d like to point out that none of these are hard to implement … they are literally all just “if” statements sprinkled here and there in the game logic. However, if Eschalon had this, I would adore those games.

So really, to me, this begs the question of why aren’t we doing this? At least for single player games; multiplayer and MMOs of course bring different issues to the table, but isn’t it about time that we put some control over how the game plays in the hands of the player? Let the player determine what level of difficulty they would like?

Just something to consider, next time you open your code editor.

Images were all found on Basilisk Games’ Website, makes of Eschalon — and seriously, I hope they keep making more games.