It’s been awhile since I’ve posted; I’ve literally had no time to play as it turns out! But as things have settled down, I’ve had a little more time. Mostly occupied with .

Anyway! I had a lot of fun with a game last night, and I wanted to share it.

I’m very MMO weary; World of Warcraft ultimately left me with a really bad taste in my mouth. Mostly because it was very competitive in ways that I did not enjoy. Competitive being the polite way to put it; in short, in a world without consequence where having a selfish attitude ultimately saves you time and energy, it makes more sense to run up and take things from other people than to help them. This has been my experience at least.

Since I dropped WoW years ago now, I never really played another MMO. I gave a couple of free ones a shot, but found them all depressingly WoW-like. However, an MMO has finally come along that has convinced me to purchase it. And indeed, after playing the stress test for it, I can’t help but wonder if this is the next thing that’s going to be copied and imitated by the rest.

Specifically, I picked up Guild Wars 2. I never played Guild Wars 1; it just didn’t really seem like my cup of tea, I wasn’t very interested. However, after hearing a description of GW2 and watching over someone’s shoulder during the open beta, I decided to give it a shot.

Part of why I was willing to give it a chance was because of its pricing model. With GW2, you pay for it once. You buy the game and that’s it; no monthly subscription. They have a cash shop and do the “micro-transaction” thing where you can buy stuff you don’t technically need instead. I’m actually okay with this; one of my problems with a game like World of Warcraft, is if I’m playing $15.00 a month to play, I feel an obligation. I’m “throwing money away” if I don’t want to play it for a month or two. With Guild Wars 2, I’ll feel okay putting it down for awhile if I want/need to; it’s considerably less committed. 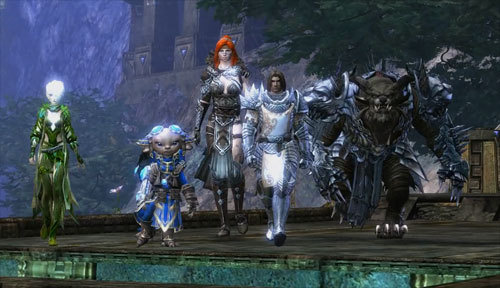 Secondly, the game plays more or less like you’re all in one group. Most MMOs have a concept of “grouping”, getting together with other players to do something. The big benefits are shared loot and shared quest objectives, among other things (safety in numbers, the ability to do bigger things, etc.) GW2 has groups, but if you’re just running around by yourself, you are sort of implicitly grouped with the people around you.

So, if you run up and help someone who’s in trouble — you actually get rewarded! In fact, anybody can “resurrect” anybody else in the field — and get experience for it! This is the first time I’ve played an MMO and actually felt … well, like a part of the world. My natural desire to be helpful and good to the people around me is actually rewarded; and in turn, I get treated likewise. This game actually fosters camaraderie; we are really in this thing together, and by rewarding “good Samaritan” behavior, its making being part of the team a core part of the game. 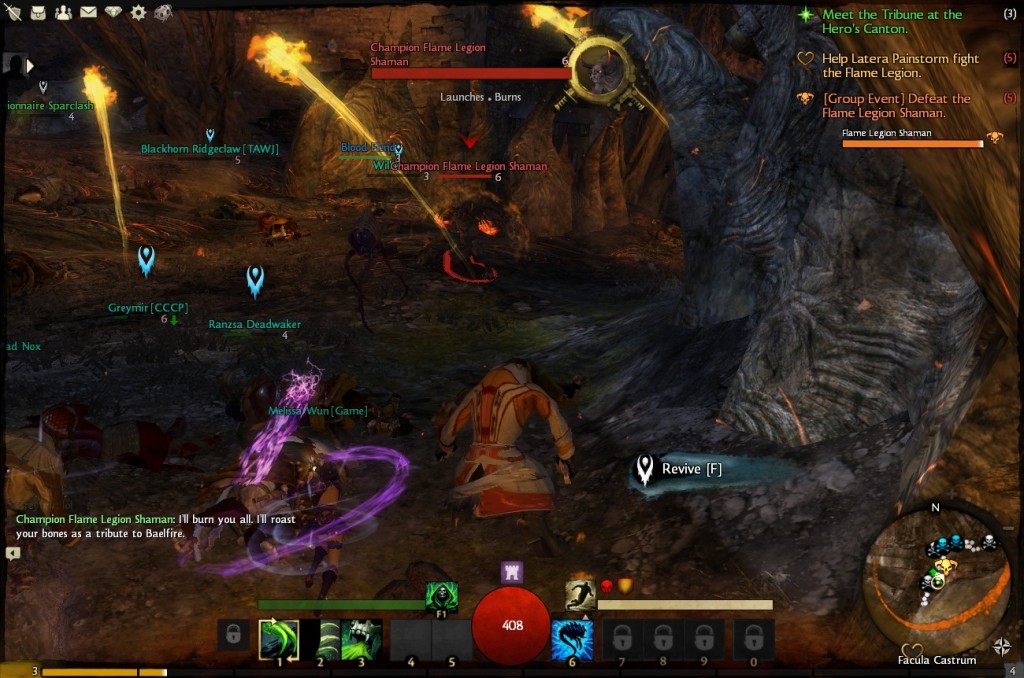 Secondly, and this is something Mass Effect 3 touched on and I think we’ll see more of in RPGs, quests are more about your location than about talking to an NPC with a ! over his head. Quests have kind of “radii” around them; when you enter a “quest radius” you get a little notification in the corner of your screen. What I said before about implicit grouping? That works for quests, too. Everyone gets rated a “medal” for participation; bronze, silver, or gold. If you walk in at the end of the quest, you still complete the quest — you just get “bronze” level participation.

I didn’t get to play long enough to really know the implication of the different “participation” levels, but I found the basic concept really compelling. The world is dynamic, too; NPCs run up to you and ask for help. You can ignore them if you want, but if you query them, they will tell you where quests are nearby. While the game does mark places on the map where there are NPCs that have quest information, most of the quests I did I just found by wandering around.

The world feels rich and alive. There’s just “stuff” going on, and you can join in whenever and however you want. And when other people are around, doing the same quest, you don’t think “aww damn, they’re going to take all the pigs I have to kill and make me have to wait for the respawn”. It’s more of a relief thing; now you’ve got someone watching your back. 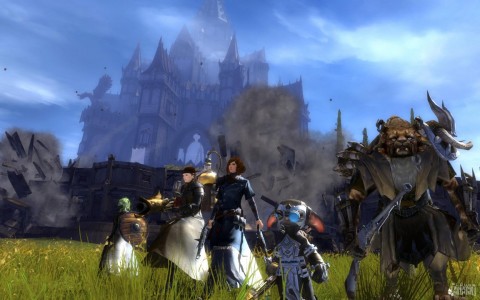 On the topic of quests, GW2 has this concept of sort of … “quest tools” I think is the best way to put it. You can pick things off the ground — some of them are silly, like broken bottles at a bar (I guess for bar fights? I never quite figured that out) but other things are fun. For instance, there’s a “Ghost Busters” style quest where you pick up a staff and you get a bunch of new abilities. You use the staff to capture ghosts. Other things are kind of silly, too — like there’s a quest where you pick up unexploded mortar shells and return them to the NPCs. If a bad guy interrupts you, you can throw the mortar at them and it will explode!

The quest tools override your normal ability-set and give you something fun and new to explore. Which brings another interesting point; your “ability menu” is based on the weapon you’re holding. Each weapon type has a different set of skills available to it. Your skills are therefore a combination of weapon type and class, which means each class has a LOT of different play styles. It’s not so much about “rotations” of buttons — WoW Simon — you get to pick how you want to play your class and use the abilities that make sense to you.

This kind of feels like the tip of the iceberg; GW2 is a really different game from the other MMOs, and also expands on things that I think general RPGs are starting to adopt. I highly recommend the game, and I think we’ll probably be seeing much more in this vein in the future. And I look forward to it!