So I’ve been playing Bastion lately (By Super Giant Games and available on Steam), and this is interesting for a couple of reasons. The biggest reason is that it’s an “Action RPG” and that’s a genre I don’t play anymore, and yet I’m playing this game.

What’s so bad about Action RPGs? Well, I find its kind of a tired genre. I’m talking about games like Diablo or Torchlight; real time games where your primary action is clicking at hoards of monsters. This is distinct from Roguelikes which, generally speaking, are turn based and more “tactical” in a lot of ways. Action RPGs are sort of repetitive stress disorder games, where you pick the best weapon or spell and “spam” it until everything is dead.

There hasn’t been a lot of innovation here. Generally speaking, there’s more action than RPG. Not a lot of depth to the world or the characters, and lacking the charm of most roguelikes (which I still play and enjoy — like Angband, and I’m looking forward to Felix evolving his). So I usually steer clear of them.

So, what makes Bastion different? It’s very much like Torchlight in appearance; the world is, generally speaking, unidirectional corridors without a lot of path variation. In fact, skinning Torchlight to look like Bastion would be pretty easy (maybe that’s what they did to make the game!). They blatantly follow the “pick your best weapon and spam it” model by forcing you to select your two weapons and one skill at the Arsenal, which makes for a somewhat tactically uninteresting game (you pick your best strategy and stick with it — you can rarely switch it up easily, and you usually have to pick before you arrive at the next level). 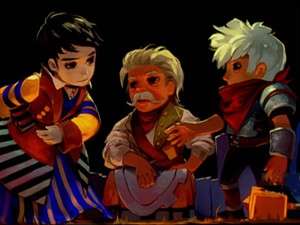 But what makes Bastion different is the amount of effort they go artistically. Some very creative and talented people built this world. The world itself is quite beautiful, and it’s narrated as you go by a character that looks kind of like Colonel Sanders from Kentucky Fried Chicken. Maybe This is Normal Where They Come From?

As for the story, it is engaging enough to keep me going. I wish they had showed the world before the “Calamity” as they call it, because it is very hard to know how different this weird floating world is from what is “expected” by the characters. I suspect they’re using that as a device to sort of challenge the player’s assumptions later on, but I don’t know yet. Still, its a lot better than your average Action RPG in that it actually has a clear story.

In short, Bastion succeeds as a work of art in my opinion; it’s beautiful, it’s creative, it’s interesting. Does it succeed as a game? Well, it got my money, so I’d have to say yes. Is Bastion fun? Kind of. It’s fun in the way a good book is fun. Let’s just say I don’t see replaying this game again (though I will probably finish it). But the idea of games as a form of art is an interesting concept that seems to be getting more popular.

That being said, I’m looking forward to Skyrim, which is almost definitely not a game that will live or die based on its artistic merits 🙂