By No Time To Play

Hello, everyone! In-between finishing up my latest tools (which I'm now using productively), I also got around to updating Tee-Wee Editor, for the first time in 18 months: 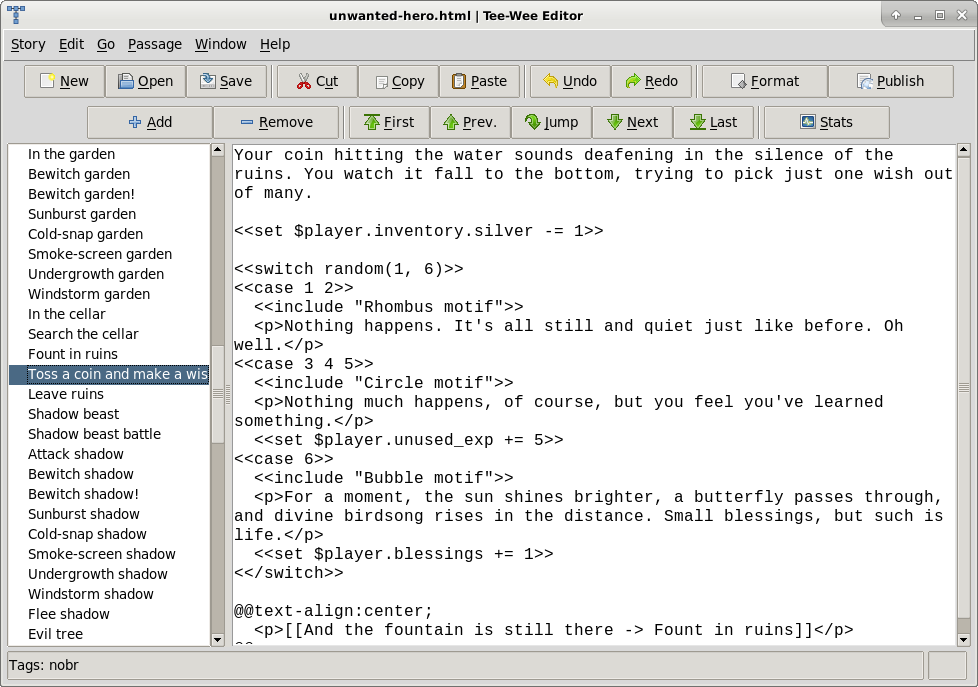 It's not a big update, but it's an important update. Now it feels right for a change, you know? And still in the way of tooling work, I also wrote an article about my side-trip into learning to use Cython. Might as well, given what my primary programming language is.

And now for news from the world of games at large, this time below the fold.

For one thing, just after posting my previous newsletter, I saw the news that Tomb Raider is 25 years old. I still remember seeing the first one on a friend's computer, and look where we are now.

Then, we have an amazing display of procedurally generated ANSI art in the latest update for Ultima Ratio Regum, and another powerful example of procedural generation via the 50 Years of Text Games project: the 2011 title Nested.

Speaking of which: a week later, the 50 Years of Text Games series has reached 2012, when Porpentine's Howling Dogs sparked a Twine-powered revolution. Wait, you mean there was snobbery in the parser game community? No kidding! I had only written about it (checks notes) two years prior, and people were all "nope, I don't see it; no problem here, move along". Okay then. But no, non-parser games didn't begin to dominate soon after that. Two years later in 2014 there was a huge controversy just because they were gaining a little prominence. It wasn't until 2016 and Detectiveland's resounding splash that the writing was on the wall. Even then, I don't think non-parser games were a majority in the IFComp until last year or so. But I guess perceptions matter more.

Anyway, in general game-related news we also have Sid Meier and the Meaning of "Civilization", another write-up about his new memoir, this time from a mainstream newspaper; and Hands-on with Macromedia Director in ScummVM: an enlightening, in-depth analysis that highlights some general issues with emulation and software preservation.

Last but not least, a recent conversation in the itch.io Discord server made me realize what the problem is with tabletop RPGs. For example, there's an avalanche of me-too space opera games, each with their own variation of the little girl, tin man, cowardly lion and scarecrow archetypes, but no compelling reason to pick one over any other. I've put out one of those, too, then wondered why nobody wanted it even for free. Even the fact that it was based on actual, completed stories (including a novel) didn't make a difference.

Nobody cares about Our Aliens / Robots Are Different trope example #7358.

Enjoy the weekend and see you next time, hopefully on a more positive note.